strange, weird, "what do you have against children"

What the hell made you think of that?

So, uh, do you mold each of these by hand? 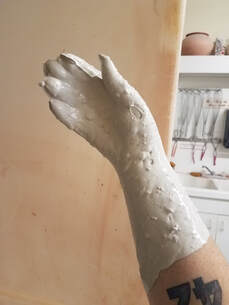 The slip - I start by making my own casting slip. I save all of my trimmings from my other line of work and let them get as dry as possible. Once sufficiently dry, I weigh the trimmings and add enough hot water to get to around the specific gravity of 1.8. Specific gravity is essentially the measure of how much ‘stuff’ is suspended in the water. Water itself has a specific gravity of 1.0, so I am looking for something that is pretty thick. After letting the water/clay mix hang out for a day or so (to make sure that it has gotten as soaked through as possible), it all gets mixed up using a drill and large paint mixing bit. Because it needs to be relatively thick, but still pourable, I then add a chemical called Darvan-7. Darvan-7 is a super-magic thing that basically makes the slip more ...slippy. It essentially makes the clay particles disperse better through the water, and therefore more pourable - without adding extra water to the mix. Extra water would take too long to absorb into the plaster mold, as well as making the turn-around time for that mold too long. And over time, the molds will disintegrate faster if too much water is used. 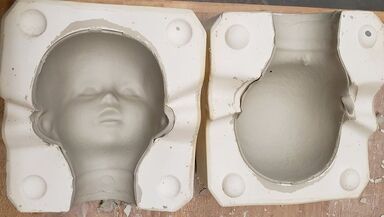 The casting process - I have a wide variety of doll-head and appendage molds for all size dolls. I generally use the same 7 or so over and over, though I have many, many more. Molds are generally two pieces, and held together with a large strong rubber band, or a band that is similar to a ratchet strap. The slip is poured in, full to the top, and then let to set for a certain amount of time. The time varies greatly depending on the density of the plaster that the mold is made of, as well as the wetness of the mold and the humidity of the air - but essentially what I am looking for is a certain thickness at the sides where the water has been absorbed into the plaster. That outside edge will form a shell of solid clay, then the inside (still liquid) slip is carefully poured back out. I then let this shell sit in the plaster for another 24 hours or more, until it has hardened sufficiently enough to remove from the plaster. After that, the molds are left to dry and the resulting cast is mutilated. This image is an example of what can happen when your piece is still too wet to be opened up (whoops).

The alterations - Most all of the baby heads get their top cut off to make them into cups or planters. Some will get only small holes cut so that they can be stacked and altered into vases. Once the bottom is cut, the inside wall of the head is scratched up, wet down, then scratched again (known as slipping and scoring). They are then set on a flat level plaster surface, and additional casting slip is poured in. The head is then rocked around to make sure that the slip gets into the scratches, and a paint brush is used to bring a bit of slip up the inside wall of the head. The heads are then left for their bottoms to dry, while covered so that the walls and bottom of the head reach the same moisture level. After that, some just have their edges cleaned up, and some get arms/legs/appendages/heads added to them to make them more sculptural. This is also done using slipping and scoring. Any piece with appendages has to dry for quite a while under wraps to make sure that the pieces dry at the same rate and do not crack off. Added pieces that are hollow will get a small, inconspicuous, hole placed in them. This is to prevent them from blowing up later as they are fired in the kiln. 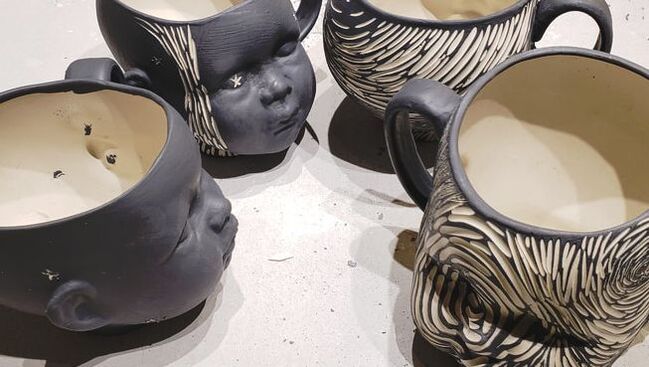 The decoration - Many pieces will get added decoration.
One type of decoration that I favor is called sgraffito. Once the pieces are at a certain level of dryness, a layer of colored slip is painted over the base. Again left to dry, the colored slip is carved back through to reveal the clay underneath.
​I also enjoy screen printing on my ceramics. I've made drawings of various bugs and miscellaneous; then made into a screen. A thickened underglaze is then pushed through the screen. Screen printing is usually done after the piece has gone through its first firing already. If the underglaze print is not refired (just to bisque), the print tends to run. Sometimes I do this intentionally, but I will also refire the piece to ‘set’ the underglaze. I will also use carving techniques and anything else that works with the piece. 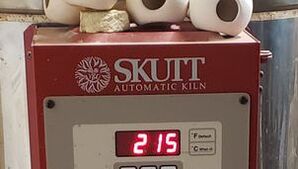 The first firing - This firing is called a bisque firing, and the purpose is to drive out any remaining moisture. The clay body also undergoes a chemical change at the same time, making it hard and unable to break back down in water.  At this point, this piece is not water-tight or able to be used for food. More decorations can be added after this firing, though not as many as before the firing. The bisque firing is done slowly, generally with a preheat (holding the kiln around 200F) of at least four hours. After the preheat, the kiln can climb a bit faster, and will ultimately reach around 1737F. It is then left to cool. All told, this first firing will take at least 8 hours, not including the preheat.